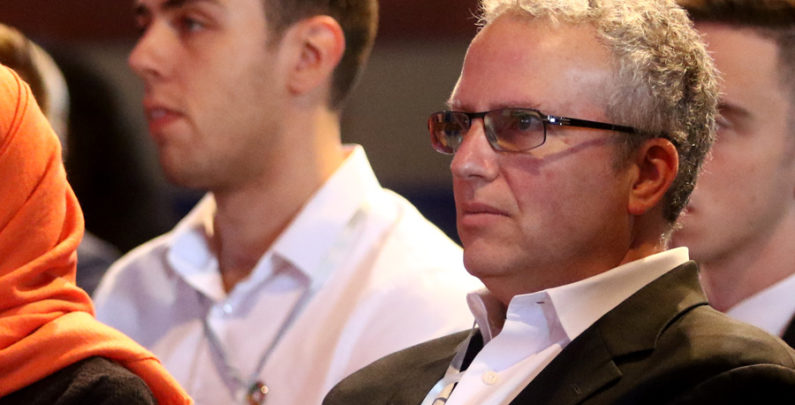 As a member of the Transformers Roadshow jury – the Islamic Development Bank (IsDB) competition held in Sarajevo in 2019, with the support of Bosnia Bank International (BBI) d.d. Sarajevo, Randazzo had the opportunity to talk to Bosnian innovators. He highlighted the potential that Bosnia and Herzegovina has and his beliefs that our country and Sarajevo may become a small growing Silicon Valley.

“We saw fifteen different presenters at the finals of the IsDB Transformers Roadshow competition in Sarajevo and they did a fantastic job. They were creative, energetic and had great ideas. Some were more advanced than others, but they presented really well, concisely and I was really impressed by the freshness in the quality of the ideas and how they are connected to help their fellow citizens and humanity. And I saw here in Sarajevo this creative energy, this community of innovators and it looks like a small growing Silicon Valley. I think you have a lot of talent and it’s just a matter of nurturing that talent in the future and helping them to thrive from the idea to the implementation,” says Randazzo.

Fil Randazzo is currently Founder and CEO Leverage Science. Leverage Science is currently helping investors and innovators identify big ideas and turn them to reality. Previously, Fil served as a Deputy Director at the Bill & Melinda Gates Foundation (BMGF). During his 12+ year tenure at BMGF, he actively participated in its rapid growth from a small startup to a 1500 employee institution. Fil co-launched and co-managed the Grand Challenges in Global Health Initiative, which in 2005 established the standard on how BMGF sources, funds and manages innovation. Fil directly managed a $600M investment portfolio which spanned areas such as health, agriculture, education, and policy. His portfolio included some of BMGF’s biggest success stories. From 1994-2004, Fil served a variety of scientific roles at the Chiron Corporation in Emeryville CA. He earned a Ph.D. in Molecular, Cellular and Development Biology at Indiana University, Bloomington and B.S. in Microbiology and Anthropology from the University of Notre Dame.

“I would urge the young people of Bosnia and Herzegovina to keep their passion and not give up their ideas. I can tell you that you have a real community in BiH, where they care about retaining talent. Everyone is proud of the talent that toured the world, but you you have a lot of talent here. The community is building an ecosystem of innovation and I see what you do through example with BBI Bank and others, you are really trying to build that community. You can build this future here. This is a place where a quality future can be built. Many great Bosnians live all over the world and my recommendation is to turn to the diaspora for help and mentoring. I am sure they would love to help entrepreneurs and build that community, work with fellow entrepreneurs to help each other grow together, “explains Dr. Randazzo.

This was his first visit to Sarajevo, Bosnia and Herzegovina, and when he learned that he was going to see innovators and scientists in the Bosnian capital, his first association with Sarajevo was the 14th Winter Olympic Games.

“I remember the 1984 Olympics. I knew Sarajevo was the true center of culture and I knew about war, but I also knew it was a really nice place. People talk about Sarajevo that is a nice place to visit. I walked through the streets and could see clearly why people talk so beautifully and warmly about Sarajevo. It is a really important center in Eastern Europe with a lot of history, a lot of pride, a lot of culture and mixing of cultures, and actually mixing culture is the key to innovation. Innovation involves taking different ideas from different places and bringing them together … This is usually the place where innovation comes from – Cultures mix. And you have that foundation, so use that, “he added.

During his stay in the Bosnian capital, Randazzo made sure that the true stories of Sarajevo as a soul-filled city were true:

“Yes, there is really this Sarajevo’s spirit. I’ll give you an example. I drink Coca-Cola diet and went out to buy it, but I didn’t have Bosnian money, only dollars and a credit card. I went into a small store and searched Coke Zero and I asked the merchant if they were receiving dollars or a credit card. The merchant handed me a Coca-Cola and told me to take it. He didn’t charge me; he just gave it to me. It was something kindest I saw and for me, it was amazing. People should know how generous, warm and kind people are here”, Randazzo stressed out.

During his 12 years at BMGF, Randazzo has managed a diverse portfolio of investments and projects worth more than $ 600 million.

“Some of the programs I have supported and are coming to an end have been created as ideas when I started working at the Foundation in 2005. I left the Foundation in 2017. They started out as small ideas just like the ideas I saw today here in Sarajevo, with innovators and a short, compelling speech that has a background. They have reached the stage where they have been tested and evaluated. For example, mosquitoes, which commonly transmit dengue, Chikungunya fever, yellow fever and Zika virus, have affected three hundred million people around the world. Scientists in Australia have come up with the idea that if they could infect these mosquitoes with bacteria found in other insects, the transmission of these diseases could be stopped. And now, after nearly fifteen years, technology seems to be delivering, it has been deployed to an area of ​​five million people, where five million people are now protected by this technology. It is hoped that in the next five to ten years an additional hundred million people will be protected from these diseases, mainly over a forty-year period. It’s really exciting for me to help innovators in the development process from idea to implementation.”

That, he says, was his inspiration to start the Leverage Science company where he currently works.

“I spent 10 years studying biotechnology in the San Francisco Bay area, and then spent twelve and a half years at the BMGF Foundation, and during that period of time, I learned a lot about science, technology and innovation, how to move from idea to impact, but and how to fund those ideas. So, what I like to do now is help donors identify great ideas and projects, and then come up with ideas where they can help save lives, change the world for the better, and use technology for good purposes. I enjoy helping entrepreneurs and innovators bring their ideas to the goal. So, I love helping out on both sides, and helping overcome unique transformational ideas, ones that really make a huge difference, I love finding them and helping them to make it a reality, “Randazzo noted.